The Rex Macbeth River Trail runs along the west side of the Minnesota River from Riverview Park near the intersections of US 169 and Belgrade Avenue in North Mankato in the south and terminates at Kiwanis Park in the North.

Riverview Park has a large stone monument and two benches in Macbeth’s honor and memory. The benches are inscribed with two of Macbeth’s poems. One of them is entitled, Treasure of Pleasure.

I often set along at night
and stare out at the street
and think of my life,
the joy and the strife
of victories and defeat.

I wonder, was there something else
I should have done with my life?
Did life hold in store
something far more
than family, job and wife?

I feel the years fast slipping by,
life’s road could end tomorrow.
What would I leave, but a few to grieve
and show their common sorrow?

Perhaps the secret I have found,
I’ll gladly share the treasure,
just try each day,
in your own way,
first give, then get, some pleasure. 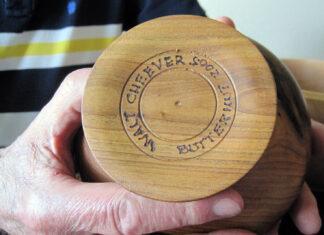 “When you feel the inside of a wooden bowl, if it’s as smooth as the outside, then it’s been well made,” said Lois Cheever,...